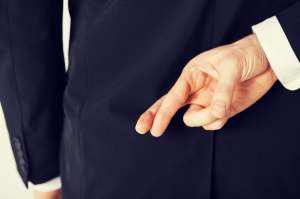 Day Two: No Room for Lying

Lying lips are detestable to the Lord, but faithful people are His delight (Proverbs 12:22, HCSB).

“But was just a ‘white lie’.” The woman across the table in the coffee shop had been explaining to me how uncomfortable she had been when one of the other women from church asked how she liked the dish she had recently brought to the pot luck. In an effort to not hurt her feelings she had been less than honest. The result was that the cook accepted the false compliment and followed up by delivering a crock pot full of the casserole my coffee-mate hadn’t liked in the least.

Now what was she going to do? If she were to go to back and try to explain her deception, she feared the hurt would be twice as deep.

That’s the problem with dishonesty. Which prompts me to wonder are there really grades of honesty? Can we be, “less than honest?”

God’s word appears to be clear: a lie is a lie. And it’s always unacceptable. Perhaps we need to learn the hard lesson of speaking the truth in love.

Recently, my husband taught me this lesson. I’ve begun wearing my hair quite short—even though I know it’s not how he would prefer it. He’s never told me he likes the cut. After my last trim he told me he liked my haircut. Surprised I turned quickly, but before I could say a word, he added, “I like the way it makes you smile.”

He hadn’t comprised himself in the least. I still know he doesn’t like short hair, but he blessed my heart completely by willing to acknowledge something he did like.

TO PONDER: Think of a situation where you’ve compromised the truth and justified it by calling it a “little white lie.” You may have felt better in the immediate, but what did you do to that relationship? How could you have been more honest?

TO DISCUSS: This discussion might be difficult, but is there someone you need to go to and set the record straight…in love?

PRAYER: God, thank you for always being honest with us. When we are tempted to shy away from the truth, give us the courage to speak the truth in love. Amen.