I don’t like spiders. I want to say I hate them, but tend to hold that emotion in strict reserve. Let’s just say I really dislike them immensely (and I am leaving that double adverb pattern in intentionally for emphasis). About the only spider I ever cared about was Charlotte, of the beloved children’s story, Charlotte’s Web. And that barely counts since she’s not real.

I believe that God could have easily used a spider to tempt Eve in the garden. They’re just that evil. Think about the sayings we associate with wicked creatures: “Oh what tangled webs we weave when first we practice to deceive”; or “Come into my parlor said the spider to the fly.” Even the prophet Isaiah understood this evil-natured beast when he described evil people who wove webs of deception to trap unsuspecting innocents (see Isaiah 59:5). 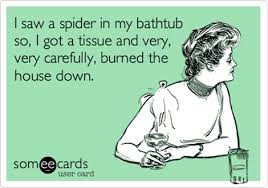 Several years ago my husband was watching a special about spiders on PBS or Animal Planet, and he learned that we are never more than three feet from a spider at any time. He was so intrigued by this tidbit that he told me immediately and has reminded me regularly ever since.

Upon learning about my ever-present nemesis, I began to make it clear that as long as I was not able to see the eight-legged imp, I was willing to co-exist. Foolishly, a bold furry wood variety attempted to challenge my conditions one morning at work. He actually charged at me. Consequently, he was very quickly judging the value of a well-placed book by its cover.

Recently a new dimension to my loathing has bubbled up. I have never liked walking into a web. It’s creepy, and I’m never quite sure if the object of my disdain has hitched a ride. Once I finish untangling myself from the practically invisible strands of microscopic super glue, I then have do a full body search for free loaders. This process is typically accompanied by a dance that embarrasses my children and brings others to tears from laughter.

I, however, am not amused.

Now when I write one of these pieces it is usually because I have worked through the issue at hand. I have had an epiphany and delight in sharing. That is not the case here. I have just walked into too many webs and danced too many dances lately. And don’t ask my husband about how he had to rescue me from the monster arachnid that I found hiding in my lunch box…it was HUGE!

But I have no resolution. They aren’t going anywhere, and I truly doubt they care about my feelings. That hurts a bit, but I think I might be able to get past it.

Perhaps it’s true, misery loves company. My frustration will resonate with someone who reads this. I like knowing I’m not alone. The other thing I know is that someone else will laugh at my childish behavior. Now while I’m not overly thrilled about being laughed at (not thrilled, but very used to it), I do like knowing that I brightened someone’s day. The way I look at it, if laughter is good medicine, being around me is good for your health.

So in case your husband missed the special and has failed to remind you: remember, there is a web-producing, eight-legged, super glue spitting beastie lurking just beyond the length of your arm.

Have a nice day. 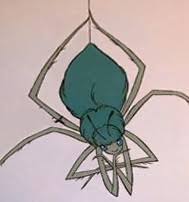