I watched in amazement as the Thanksgiving crowd devoured the spread on the dessert table. As they dispersed, I realized there was nothing left for me—just crumbs

My daughter walked up to me, a smudge of frosting betraying her part in the feeding frenzy. “Mom, I’m sorry. We didn’t think about you.”

I wiped the frosting away, and smiled. “That’s okay. I like the crumbs.” Then I reached for a spoon and began to scoop up the remnants of carrot cake and cream cheese frosting.

Later, while I was scraping the dishes, getting them ready to wash, I came on the cake plate—and I remembered the earlier conversation. How often do I settle for the crumbs? We usually think of that in a negative, limiting, settling way. But a woman came to Jesus one day and those around were disgusted with her presence. She was a foreigner…a Gentile.

She came right up for Jesus and begged for a healing for her daughter. Jesus picked up the disgust around them and played along. Why should he give her anything? The spiritual food he was sharing was meant for his people. But she reminded him even the dogs were entitled to crumbs.

Eating the crumbs had become my way of enjoying what was left and watching my family enjoy the rest. For the woman, anything she could get from Jesus would be enough.

This holy season, what is our “enough”? Can we appreciate the moments, the gifts, the time with family and friends? And most of all will we find enough in the manger?

TO PONDER: Have you ever settled for less than you wanted? Have you ever had to persist in your faith journey when others doubted or gave up?

PRAYER: God, you loved us enough to be born here on earth. Show us how much that is. Help us to persist in our love for you…and always find you to enough for our every need. Amen 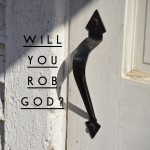 We live in a world that blesses, condones, and encourages stealing…but condemns the thief.

Many are drowning in debt because they keep taking and taking, buying and buying, what they can never afford.

Even our language betrays our behavior: we “borrow” from Peter to pay Paul. We’ve done our best to minimize the sting, even glamorizing the sin: we pirate, we embezzle, we reappropriate.

And that’s just what we do with money.

But I want us to consider two stories from the Bible that we might not immediately link to stealing—and how they might relate to us.

In Mark’s gospel, chapter 5, we find the story of a woman who had been ill for a dozen years. No one in that day was able to bring her relief and because her ailment deemed her unclean (and therefore medically and socially isolated) she was doubly desperate to find relief.

She hears of this miracle working man. She didn’t care about the talk about him possibly being the long-awaited Messiah—she just wanted to stop hurting and stop being alone. So she decided to find him, follow him, and to sneak into the crowd and steal her miracle.

She can’t go to him. She can’t even be in the crowd. Her plan: slip in and slip out. No one ever needs to know

Jesus knew the instant her fingers touched the very edge of his robe.  And she was caught in the act of stealing from Jesus.

But instead of calling the law keepers, he met eyes with this woman and assured her it was her faith that made her well.

When he looks at her, he doesn’t call her a theif, he calls her daughter. He identifies her as family—as his own.

Why do we, like this woman, try to steal what God wants to give us? Why would we rather be thieves instead of children?

The other story can be found in Matthew 21. Jesus is angry in this story, angry and violent. Here we see Jesus on the attack, clearing the money changers out of the temple.

Have you heard the old saying: give them an inch and they’ll take a mile? That’s what had been slowly happening in the temple. Initially, there was provision made for those who traveled great distances to purchase their items for sacrifice in the outer courts. Over time, and with the growth of business, the questionably proiftable business had spilled over into the area where there was to be prayer, not buying, selling, and price gouging.

It was sanctioned theifery. It was big business. And those who were profiting had the power in a place where the power—and the glory—was supposed to be God’s.

And Jesus decided to do something about it—and he didn’t just upset the apple cart. He infuriated those who had come to depend on their ill-gotten gain to support their cushy lifestyle.

He ticked off the wrong people and it played a major role in getting him killed.

What can we learn from these two stories: we have to stop stealing. Because when you peel back all the layers: when we steal…we are stealing from God.

Most of us learned the Shepherd’s Psalm as children, Psalm 23. Perhaps we need to remind ourselves how it begins: The Lord is my shepherd, I shall not want.

What does that mean? The Lord (God, the creator of the universe) is my provider and keeper. He has it all. And he provides for my every need. I HAVE everything in Him that I will ever need.

Okay, one more story image. Remember the younger son, often referred to as the Prodigal? In essence he “steals” his inheritance, runs away, and because he’s not mature enough to know how to handle instant wealth, he squanders it—and ends up destitute in a pigpen. (You can read the story in Luke 15)

Coming to his senses, he realizes how foolish he had been and decides it was so bad back on the farm, so he heads home.

When he gets there, Dad is so happy to see him, he throws a party to welcome him home. Even though the lad had in essence wished his father dead—Dad kept loving and providing.

How much easier our lives would be if we could just come to him with our needs instead of trying to find ways of meeting them on our own.

Prayer Thoughts: Father God. Forgive me for trying to take what isn’t mine. Forgive me for not trusting that you who are not bound by time, who can see the beginning and the end (and I will admit that’s a tough one to wrap my puny brain around), not only know what I need, but when I need it—and you want to give it to me. Give me the courage to get out of the mess, the pigpen, I’ve made and help me put my life back in order. Thanks.