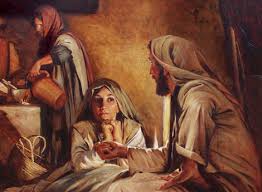 I’ve asked that question more times than I can remember. Today we were discussing it at the Widow’s Support group and a brand new thought occurred to me.

We typically associate Mary and Martha’s behaviors with their personalities and their spirituality. Whole books have been written about this: Having a Mary spirit in a Martha World.

Nice. But in this case, what if we consider their behavior in context.

These two women just lost their brother. There is no mention of any husbands, so they are either widowed or old maids by cultural standards. That means their source of support and sustenance was gone.

These women were facing a dire situation. Their brother died and the one guy they knew who could have possibly done something about it drug his feet getting there. Jesus waited three days after he received the news that Lazarus was dying…and then he showed up when Lazarus was four days in the tomb.

Martha handled her stress by getting busy in the kitchen. Slamming some cupboards and banging some pans can be very therapeutic. At least for me…and Martha.

Martha didn’t stuff her feelings. She was not going to get an ulcer from swallowing her anger…or her grief. She walked right up to Jesus and let him know she was miffed…hurt…disappointed…confused. She poured out her heart. No, it wasn’t pretty. How could it be?

Why does her response to Jesus’ appearing at the house surprise us? Why does she earn bad girl points for expressing herself? She just lost her brother and the future was looking pretty terrifying.

And while she was at it she took a couple shots at Mary. Siblings do that sort of thing, too.

Mary. A very different kind of personality. Mary shuts down. Mary pulls inward. Mary may be angry, hurt, and confused…her expression is tears. Banging pots does nothing for her.

How do you handle your grief?

I remember when my dad died. He had cancer. He was at home and we had hospice services. He took his last breath around 6:00am. The funeral home came for his body around 7:00am. By 8:00am my mother had turned the once dining room turned hospice equipped dying room back into a dining room–you would never have known the room was used for anything else. She got busy, that’s how she handled her grief.

If you only had that snapshot of my mother she might have appeared cold and detached…but she wasn’t. She was just functioning the only way she knew how. And the hospice worker noted that she was responding according to her personality.

What if all the world had of you was a snapshot of your most difficult day? What would it say about you? Are you a banger or a weeper?

Actually, I’m not sure that’s the most important thing. Jesus doesn’t value Mary’s weepiness more than Martha’s banging. What he valued was that she brought it to him. So go ahead, bang the pans if that makes you feel better, but don’t forget to come to Jesus.

5 thoughts on “Compassion for Mary and Martha”